There’s an object out there that pushes physics as we know it to its breaking point. It possesses a gravity so strong, not even light can escape! It is an astronomical entity that has been studied by greats like Stephen Hawking and Albert Einstein. It was a mere theory.

All that changed on 10th of April 2019. A monumental breakthrough in the history of Science was made public. The first-ever image of a black hole was unveiled to the world. Hundreds of simulations existed prior to this, but this is the real deal.

Michael Kramer, director at the Max Planck Institute for Radio Astronomy, said, “The history of science will be divided into the time before the image, and the time after the image.”

But how was it possible to take a picture of something that gives out no light?

The black hole in question is more than 55 million light-years away, buried deep in the heart of a galaxy called the Messier 87 galaxy. It is a supermassive black hole, 6.5 billion times more massive than our sun. It is enormous even compared to other supermassive black holes! At that distance, the black hole appears about as large as orange would look to us if it were on the moon. No ordinary camera can reveal such a target.

The magnifying power of a telescope is directly related to its size. The image was captured by the Event Horizon Telescope, consisting of 8 telescopes, spread out in different locations across the globe (places like South Pole, Hawaii, Chile, etc.). These telescopes are kept in synchronization with powerful atomic clocks. Together they can operate as one giant receiver, effectively the size of Earth! As the Earth rotates, we can reconstruct an image. Once readings were taken from the different telescopes, they were all brought together, and image processing algorithms were applied. This combined antenna maps radio waves emitted by the ring of hot gas around the black hole. The Event horizon telescope team worked for more than a decade on this.

The disk of light visible around the black hole is formed when a star travels too close and is broken apart in the process. The event horizon is around 25 billion miles across. Einstein’s theory of General Relativity predicted the size and shape of the event horizon, and the 2 readings agree well with each other.

Another striking feature observed is that the ring is not perfectly symmetric. One side appears brighter than the other. This is because we’re looking at a relativistic environment. Relativistic means that the matter and signals given off are being affected by gravity, which distorts both space and time.

This image is just the beginning. The Event horizon team has set their eyes on another black hole. Within the Milky Way itself this time. It is the Sagittarius A star, a supermassive black hole at the center of the Milky Way, 25000 light years away. This black hole is significantly smaller, much more difficult to image.

It took 2 years to combine and analyse data for this breakthrough image, and it may be a painful wait before we see what other black holes look like. Hawking and Einstein can finally Rest in Peace. 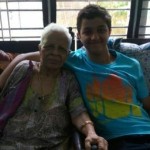