There are 2 kinds of people in this world: the hopeless romantics and the cynical romantics. So which one do you fit into? Those who believe love is fantastic believes it exists and that it will happen to them. Those amongst you readers who nodded all knowingly, you guys are the hopeless romantics. Now, those who believe love is fantastic but a dream; that it doesn’t exist and won’t happen to them. My beloved readers who snorted in complete agreement, we are the cynical romantics.

Let’s follow some popular trains of thought and try to understand what makes people cynical about love. I for one came across some very interesting firsthand accounts from people journeying by these trains. One anonymous woman on the internet was of the opinion that prior heart break causes some people to harden and believe that love and its related joys are dead. She recounted her heartbreak which started with how she and her boyfriend were at a coffee shop and how her boyfriend took his napkin. Put it down on the plate. Wiped his brow. Took a deep breath and dramatically said, “You and I are unfinished business!” and then proceeded to get up and leave. Just like that!. Which left me in an enraged fit. Which movie was this from? Are people really that cheesy? That was so cheesy it put a pizza to shame but more importantly it shattered my belief that cheesiness in Rom-Coms was what physics was to action movies. Unreal!

However, her tale didn’t end there. She then narrates how after her heart broke, she started an online support group for heartbroken people who now disbelieve in love and its joys. The club would welcome men and women with heavy hearts thus.

Welcome! Ladies and gentlemen. To the love stinks club where the only refreshments served are fresh tears and alcohol, where sulking and whining is the new twerking.

That’s one way to become cynical about love. Another way is when you shift your perspective to one that looks at the science of love as a combination of brain chemistry and biology. A paper quotes that there’s 3 stages to love and it might become a little harder to scoff and deny the scientific treatment of love once you read on.

Or LAA for those of you who think abbreviations are smarter. These three elements are fueled by a bunch of hormones and chemicals. Some dope like dopamine, some cute like oxytocin- the cuddle hormone. The paper ends on the note that falling love is easy.

Now for the skeptics and muzzled folks with raised eyebrows, if you think this to be ridiculous. A psychology professor, got his subjects to do this 34 minute experiment and found that many out of these couples felt deeply attracted after this experiment. Four of them even got married. It’s hard to ignore how easy love can be. It’s not magic, fate or destiny as hopeless romantics like to believe.

The secret to being a cynical romantic is like being the hulk. The hulk’s secret is that he’s always angry. Readers, the secret of the cynical romantic is that they are always in love. Cynical romantics are torn. Sure the world is a terrible place. Mind boggling instances of human apathy comes to light every day, wars, frightening crimes, the extreme lows humans can descend to. The people who you know are ignorant, entitled morons by their comments on Facebook. But they also love this world because they also see, meet and know humans who soar and rise above. People like rays of sunshine who radiate light and warmth wherever they go by a word, touch or look.

Love is multidimensional and whether you are hopelessly or cynically romantic, as long as it’s all good in here. There’s hope and love for everyone.

Shwetha Nair
Do you live to read or read to live? Figure with me 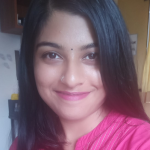 Do you live to read or read to live? Figure with me